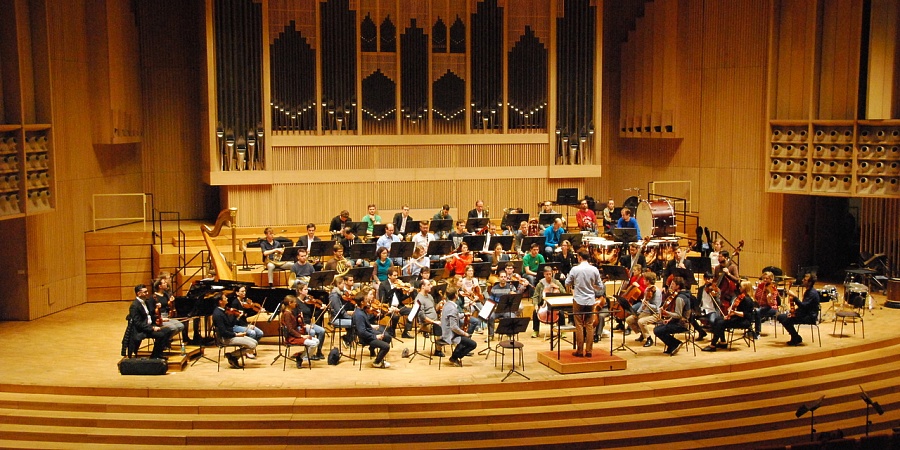 This concert programme combines compositions by Jewish composers which are very different, but all share a strong spiritual vein.

The first part of the concert is dedicated to two extraordinary ballet scores of the first half of the 20th century.

In La creation du monde Op. 81, composed in 1923 shortly after the composer travelled through the USA, Darius Milhaud integrated more jazz elements into his music than most of his “classical” contemporaries. The ballet by Blaise Cendrars recurs to African myths.

Ten years later, the so-called “ballet chanté” Die sieben Todsünden was created. This “sung ballet” about the seven deadly sins is Kurt Weill’s setting of a text by Bertolt Brecht.

The work was written in Paris, where Weill and Brecht had both sought to escape from the Nazis. The stage work, conceived for George Balanchine’s group Les Ballets, was to be the last collaboration between the two artists.

In Die sieben Todsünden der Kleinbürger, thus its full title, Weill continued the stylistic synthesis between elements of classical opera and 1920s entertainment music, such as tango, foxtrot, polka and others, which he had already practiced in the earlier collaborations with Brecht.

This resulted in a work in seven scenes framed by a prologue and epilogue, telling the story of an upwardly mobile young American woman named Anna, which quickly revealed itself as caustic social criticism of the excesses of capitalism.

In 1942, Leonard Bernstein composed his first symphony, entitled Jeremiah, which he submitted at the last minute to a composition competition at the New England Conservatory.

The three-movement work tells of the destruction of Jerusalem by the Babylonians and is based on the lamentations of Jeremiah in the Hebrew bible: its movements are entitled Prophecy, Profanation, Lamentation. In the third movement, the orchestra is joined by a mezzo-soprano. Like a priestess, the singer laments the destruction of the temple of Jerusalem. Bernstein once described the connection between the work and the time of its creation as follows: “In a sense I suppose I'm always writing the same piece, as all composers do. The work I have been writing all my life is about the struggle that is born of the crisis of our century, the crisis of faith…. How could I close my eyes to the problems of my own people? I’d give everything I have to be able to strike a death blow at fascism.”