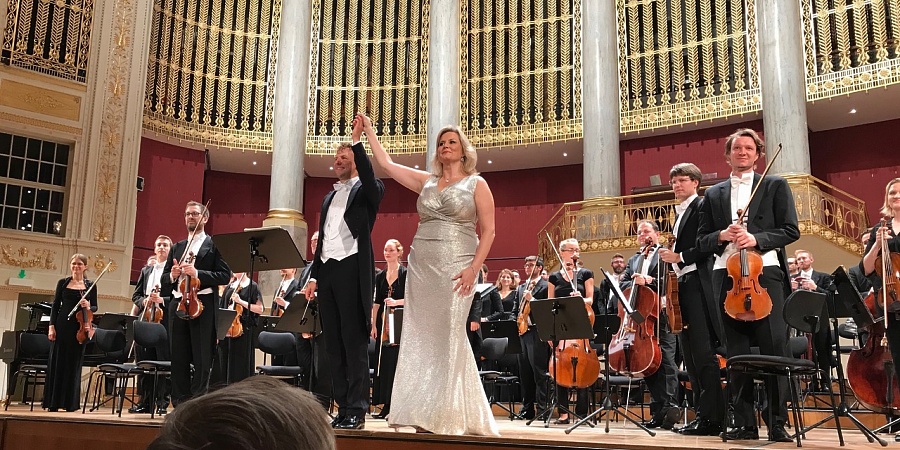 In 2018 we were able to celebrate a brilliant double anniversary. We were delighted to collaborate with Camilla Nylund, the legendary Wagner and Strauss singer who has triumphed on all the world’s major stages. Here, she explored the songs of Zemlinsky and Korngold for the first time and also performed Leonard Bernstein’s important works for soprano.

The first part of the concert is dedicated to three great composers active at the beginning of the 20th century.

In La creation du monde Op. 81, which Darius Milhaud composed shortly after a journey through the USA in 1923, he integrated elements of jazz into his music to a far greater extent than his “classical” contemporaries. The ballet choreographed by Blaise Cendrars recurs to African myths.

Alexander von Zemlinsky’s setting of Eichendorff’s Waldgespräch (1896) shows him as a master of dramatic tension, shaping a gripping miniature drama from the story of the romantic dream figure Loreley. Ernst Wolfgang Korngold, one of Vienna’s great musical visionaries in the early 20th century, comes across as a youthful, idealistic dreamer in his Sechs einfache Lieder Op. 9 (1911), pouring the first stirrings of love into artful melodies. Dream and reality ultimately blend in Korngold’s most well-known opera, Die tote Stadt (1920), in which Paul’s wife Marie appears to him after her death in the shape of Marietta, and the widower loses the ability to distinguish between vision and reality. The aria Glück, das mir verblieb is the great musical and dramaturgical highlight of the opera.

As different as the works of Darius Milhaud, Alexander von Zemlinsky and Erich Wolfgang Korngold may seem, they all have one thing in common: due to their Jewish background and the imminent persecution by the inhuman Nazi regime with its racist ideology, they all had to emigrate with their families from Europe to the United States.

Leonard Bernstein was undoubtedly one of the most fascinating, versatile and influential protagonists of the music world of the 20th century. He occupies a unique place in music history, having contributed epochal interpretations as a brilliant conductor and pianist (Mahler, Schumann, Beethoven…) but also as one of the most important composers of the past century. We dedicate the second half of this concert programme to his incredibly broad output. Next to the apotheosis of jazz Prelude, Fugue and Riffs, we touch upon his musical theatre works West Side Story, 1600 Pennsylvania Avenue, Songfest, On the Town and Candide! In between, we perform a rarely-heard orchestral version of an intimate Bernstein song by Sid Ramin, who was responsible for the instrumentation of West Side Story.

We are particularly delighted to be working with Camilla Nylund, a legendary Wagner and Strauss singer who has triumphed on all the world’s major stages. She also embodies a breath-taking Marietta in Korngold’s Die tote Stadt. She dedicates herself to Zemlinsky’s and Korngold’s songs, in addition to performing Leonard Bernstein’s greatest works for soprano.